Overview
Over 60 Million Americans suffer from Adult Acquired Flatfoot (AAF), otherwise known as Posterior Tibial Tendon Dysfunction or PTTD. This condition generally occurs in adults from 40-65 years of age, and it usually only occurs in one foot, not both. The Posterior Tibial (PT) Tendon courses along the inside part of the ankle and underneath the arch of the foot. It is the major supporting structure for the arch. Over time, the tendon becomes diseased, from overuse, and starts to lose it's strength. As a result, the arch begins to collapse, placing further strain on the PT Tendon, leading to further decrease in tendon strength, which causes further collapse of the arch. This is described as a progressive deformity because it will generally get worse over time. 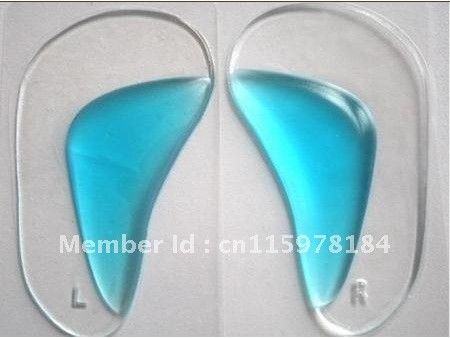 Causes
Posterior tibial tendon dysfunction is the most common cause of acquired adult flatfoot. Sometimes this can be a result of specific trauma, but usually the tendon becomes injured from wear and tear over time. This is more prevalent in individuals with an inherited flat foot but excessive weight, age, and level of activity are also contributing factors.

Symptoms
Symptoms of pain may have developed gradually as result of overuse or they may be traced to one minor injury. Typically, the pain localizes to the inside (medial) aspect of the ankle, under the medial malleolus. However, some patients will also experience pain over the outside (lateral) aspect of the hindfoot because of the displacement of the calcaneus impinging with the lateral malleolus. This usually occurs later in the course of the condition. Patients may walk with a limp or in advanced cases be disabled due to pain. They may also have noticed worsening of their flatfoot deformity.

Diagnosis
First, both feet should be examined with the patient standing and the entire lower extremity visible. The foot should be inspected from above as well as from behind the patient, as valgus angulation of the hindfoot is best appreciated when the foot is viewed from behind. Johnson described the so-called more-toes sign: with more advanced deformity and abduction of the forefoot, more of the lateral toes become visible when the foot is viewed from behind. The single-limb heel-rise test is an excellent determinant of the function of the posterior tibial tendon. The patient is asked to attempt to rise onto the ball of one foot while the other foot is suspended off the floor. Under normal circumstances, the posterior tibial muscle, which inverts and stabilizes the hindfoot, is activated as the patient begins to rise onto the forefoot. The gastrocnemius-soleus muscle group then elevates the calcaneus, and the heel-rise is accomplished. With dysfunction of the posterior tibial tendon, however, inversion of the heel is weak, and either the heel remains in valgus or the patient is unable to rise onto the forefoot. If the patient can do a single-limb heel-rise, the limb may be stressed further by asking the patient to perform this maneuver repetitively.

Non surgical Treatment
Get treated early. There is no recommended home treatment. While in stage one of the deformity, rest, a cast, and anti-inflammatory therapy can help you find relief. This treatment is followed by creating custom-molded foot orthoses and orthopedic footwear. These customized items are critical in maintaining the stability of the foot and ankle. Once the tendon has stretched and deformity is visible, the chances of success for non-surgical treatment are significantly lower. In a small percentage of patients, total immobilization may arrest the progression of the deformity. A long-term brace known as an ankle foot orthosis is required to keep the deformity from progressing. The Richie Brace, a type of ankle foot orthosis, shows significant success as a treatment for stage two posterior tibial dysfunction. It is a sport-style brace connected to a custom corrected foot orthodic that fits into most lace-up footwear (including athletic shoes). It is also light weight and more cosmetically appealing than traditionally prescribed ankle foot orthosis. The Arizona Brace, California Brace or Gauntlet Brace may also be recommended depending on your needs.

Surgical Treatment
Stage two deformities are less responsive to conservative therapies that can be effective in mild deformities. Bone procedures are necessary at this stage in order to recreate the arch and stabilize the foot. These procedures include isolated fusion procedures, bone grafts, and/or the repositioning of bones through cuts called osteotomies. The realigned bones are generally held in place with screws, pins, plates, or staples while the bone heals. A tendon transfer may or may not be utilized depending on the condition of the posterior tibial tendon. Stage three deformities are better treated with surgical correction, in healthy patients. Patients that are unable to tolerate surgery or the prolonged healing period are better served with either arch supports known as orthotics or bracing such as the Richie Brace. Surgical correction at this stage usually requires fusion procedures such as a triple or double arthrodesis. This involves fusing the two or three major bones in the back of the foot together with screws or pins. The most common joints fused together are the subtalar joint, talonavicular joint, and the calcaneocuboid joint. By fusing the bones together the surgeon is able to correct structural deformity and alleviate arthritic pain. Tendon transfer procedures are usually not beneficial at this stage. Stage four deformities are treated similarly but with the addition of fusing the ankle joint.