In growing children, legs can be made equal or nearly equal in length with a relatively simple surgical procedure. This procedure slows down the growth of the longer leg at one or two growth sites. Your physician can tell you how much equalization can be gained by this procedure. The procedure is performed under X-ray control through very small incisions in the knee area. This procedure will not cause an immediate correction in length. Instead, the limb length discrepancy will gradually decrease as the opposite extremity continues to grow and "catch up." Timing of the procedure is critical. The goal is to reach equal leg length by the time growth normally ends. This is usually in the mid-to-late teenage years. Disadvantages of this option include the possibility of slight over-correction or under-correction of the limb length discrepancy. In addition, the patient's adult height will be less than if the shorter leg had been lengthened. Correction of significant limb length discrepancy by this method may make a patient's body look slightly disproportionate because of the shorter leg. In some cases the longer leg can be shortened, but a major shortening may weaken the muscles of the leg. In the thighbone (femur), a maximum of 3 inches can be shortened. In the shinbone, a maximum of 2 inches can be shortened. 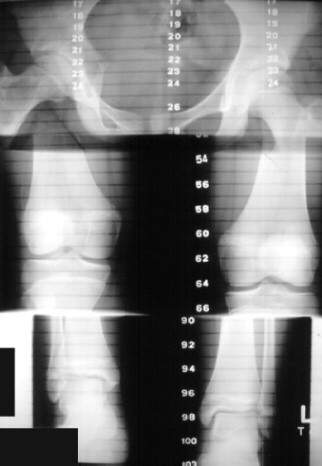 The effects of a short leg depend upon the individual and the extent of discrepancy. The most common manifestation if a lateral deviation of the lumbar spine toward the short side with compensatory curves up the spine that can extend into the neck and even impacts the TMJ. Studies have shown that anterior and posterior curve abnormalities also can result.

A systematic and well organized approach should be used in the diagnosis of LLD to ensure all relevant factors are considered and no clues are overlooked which could explain the difference. To determine the asymmetry a patient should be evaluated whilst standing and walking. During the process special care should be used to note the extent of pelvic shift from side to side and deviation along the plane of the front or leading leg as well as the traverse deviation of the back leg and abnormal curvature of the spine. Dynamic gait analysis should be conducted during waling where observation of movement on the sagittal, frontal and transverse planes should be noted. Also observe head, neck and shoulder movements for any tilting.

Treatment depends on what limb has the deformity and the amount of deformity present. For example, there may be loss of function of the leg or arm. Cosmetic issues may also be a concern for the patient and their family. If there are problems with the arms, the goal is to improve the appearance and function of the arm. Treatment of leg problems try to correct the deformity that may cause arthritis as the child gets older. If the problem is leg length, where the legs are not "equal," the goal is equalization (making the legs the same length). Treatment may include the use of adaptive devices, prosthesis, orthotics or shoe lifts. If the problem is more severe and not treatable with these methods, then surgery may be necessary.

how to increase height naturally after 18

Lengthening is usually done by corticotomy and gradual distraction. This technique can result in lengthenings of 25% or more, but typically lengthening of 15%, or about 6 cm, is recommended. The limits of lengthening depend on patient tolerance, bony consolidation, maintenance of range of motion, and stability of the joints above and below the lengthened limb. Numerous fixation devices are available, such as the ring fixator with fine wires, monolateral fixator with half pins, or a hybrid frame. The choice of fixation device depends on the desired goal. A monolateral device is easier to apply and better tolerated by the patient. The disadvantages of monolateral fixation devices include the limitation of the degree of angular correction that can concurrently be obtained; the cantilever effect on the pins, which may result in angular deformity, especially when lengthening the femur in large patients; and the difficulty in making adjustments without placing new pins. Monolateral fixators appear to have a similar success rate as circular fixators, especially with more modest lengthenings (20%).
« Leg Length Discrepancy Treatment For Ad… What Causes Mortons Neuroma »
Profile